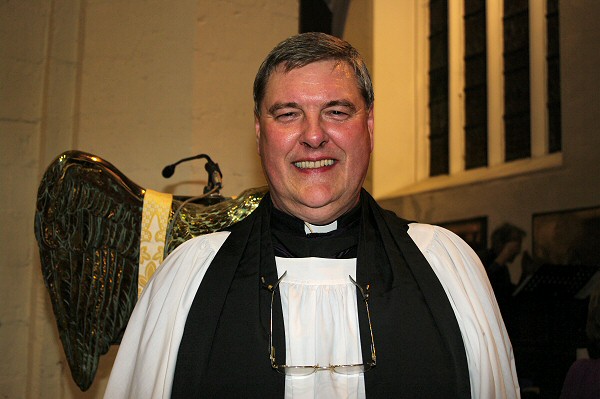 from the Parish News Sheet for Sunday 30 August 2009

INDUCTION SERVICE OF
Revd Graham Osborne
as Vicar* of the United Benefice of
Leatherhead and Mickleham
This will be held on
Wednesday 18 November at 7.30pm at
St Mary & St Nicholas, Leatherhead

from the August 2009 Parish of Leatherhead magazine

He served for five years as Rural Dean of Gloucester City Deanery during which time he led the Deanery Mission Action Planning process to develop a strategy and plan for the City Deanery.

He is planning to undertake an MPhil on the Myers-Briggs Type Indicator and Christian Leadership, building on the paper he wrote during his recent sabbatical leave. His interests include sport, reading, music and computing.

Graham is married to Nicky and they have three children - Holly (24) is a Primary school teacher about to move to a school in Truro after two years teaching in Northampton; Luke (20) is about to go up to Leeds University to read Theatre and Performance following a Foundation Course at the Oxford School of Drama and time spent working, performing and directing in Oxford and Cheltenham; Bethany (19) is the Credit Controller of a telesales company in Cheltenham.

The start date is subject to negotiation but it is hoped that Graham will be with us in the second half of October.

Churchwarden Navin Mehta writes: Graham came over as a wise and mature priest able to operate in a variety of contexts. In answer to our statement of needs question about supporting the existing traditional services alongside the continuing development of contemporary worship styles, he said his philosophy was "as well as, not instead of".

During his time at St Catharine's he has found and appointed three Directors of Music: one has gone to become an Organ Scholar, the second was drawn towards more informal worship styles of music, and the current one combines classical training as an organist and choir mistress. He will strive to find someone for Leatherhead. So we hope and pray that Revd Graham Osborne will be the right person for us here with the following qualities:

Navin Mehta has recently returned from a short holiday in Northern Ireland, where he visited Londonderry. He writes: The rumblings of dissension are still there as well as some mesh "walls" to keep the factions apart. However, walking in the shopping malls one would not notice whether those around us were Catholics or Protestants. Feelings run much deeper and have their roots in political ideals of long ago, not just the religious ones of today.

It has seemed that the interregnum has made us think of what each of us wants from our Church. We must focus on being part of a family where we each have a role to play. We look forward to working with our new incumbent to lead us on. It is good that we have ideas of change that will take us into the next phase of our religious path. We must, however, look forward and make change with thought and consideration for others and not be blinkered into thinking that our own way is the best. We do not want walls of any kind to divide those whose modern views might clash with those whose ideals are more traditional and contemplative.

We are one family and we look forward to having a new head of this family to take leadership that has been in this town for over one thousand years. We are but one chapter in the life of this parish. The Churchwardens